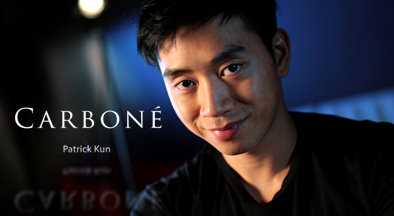 From inside the head of Patrick Kun comes an extremely visual routine involving a signed card and 2 jokers. We get it -- the card sandwich plot has been done over and over, but NOT with the Patrick-visual-Kun-ness that is CARBONÉ.

Here's the deal. You (the magician), place two jokers on to the table. Just two jokers. The other person (the spectator), then selects and signs a card. That card is openly placed back into the deck. Instantly, you slowly spread the two jokers to reveal a face down card has magically (yes, magically)-- appeared in between the two jokers.

Is it just any card? No. It's THEIR signed card.