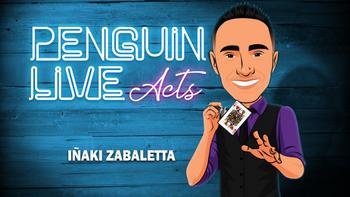 Carlos Ignacio Zabaletta. ¨Iñaki Zabaletta¨ Was born in Mar del Plata; Argentina, the 28 of August of 1981.

He began his studies in magic at the age of nine with the great master Ricardo Martín and today he continues studying and researching to develop this marvelous art to the highest level.

He combines his labour as a performer with teaching magic in the most prestigious magic schools in the world: Vernet in Argentina, and the Ana Tamariz Magic School in Spain. He is also a professor at the University Infanta Cristina of Madrid.

From 2016 to 2019 has performed as a resident magician in Chimelong doing more than 3000 presentations.

He has been and award winner with diverse prizes among them the World Prize of Card Magic (FISM The Hage 2003).

Also several interventions on tv in Spain, Greece and Argentina.

What will he teach?

Psyco: Card stab routine Malini´s style. The highlight of the routine is that the spectator shuffle the cards on the table (scrablle the cards) and inmediately after that the magician stabs the cards.

R&B phenomena: Out of this world for parlour and stage conditions.

Bill, nut, egg and orange: profesional and practical handling for this wonderful classic.