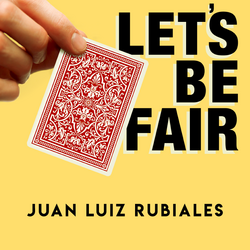 A true magician fooler from a Spanish master. They mix the cards before AND after they make their selection.

Juan Luis Rubiales used to be one of the best-kept secrets in Spain. His magic is deeply fooling to lay audiences and magicians alike. It’s not only direct, but everything seems completely above board even when he is being incredibly sneaky. Discover your audience member’s card in an impossibly fair manner with Let’s Be Fair.

The audience cuts the deck into 3 piles. They shuffle the first pile so the magician couldn’t know the top card. They memorize a card from that pile. Then they shuffle another packet and place that on top of the first pile. Then they can put that on top of or underneath the last pile and cut the deck to their heart’s content. The magician takes a quick look at the cards and then places it face-up on the table. After feeling the energy of the cards as they are removed, the performer suddenly declares that the value of the card on the face of the deck tells you the position of the memorized card. The audience member can count down the number of cards equal to the value of the card on the face of the deck, and amazingly they reveal the selected card.

Juan teaches you how to get into this amazing trick from a borrowed deck. Once you know the principles at work, you’ll be able to do this effect with almost no moves. The fair nature of the selection of the card, as well as how it is lost in the deck, makes it seem as though there is no way the magician could ever find it. Best of all, the trick requires no gimmicks or memory work. Get great reactions with Let’s Be Fair.