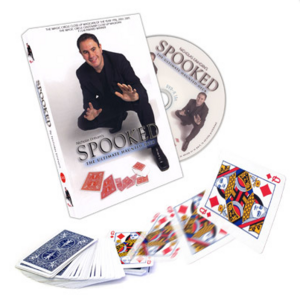 From a borrowed deck, a card is freely chosen and returned. The deck is isolated on the floor, away from the magician. Under complete control, the deck eerily begins to cut itself to a card in the centre. The card 'jumps' out and away from the deck and is revealed to be the selection. Everything can be handed out for immediate examination.

Filmed at The Centre for The Magic Arts, The Magic Circle's famous headquarters and home of 10,000 secrets. What better place to reveal a secret than within Europe's largest library of magic books. This is the first time Nicholas Einhorn has revealed the secret of Spooked on DVD. It is, without question a reputation making effect, which will be remembered by your spectators for a long, long time.