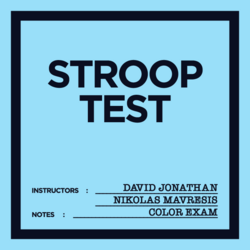 A stunning demonstration of influence, wrapped up in a fascinating psychological phenomenon. A perfect mentalism routine.

Predict the future using a simple psychological experiment that your audience won’t see coming. Created by David Jonathan and Nikolas Mavresis, this effect blends real science with real magic to predict your spectator’s choices 100% of the time. This is The Stroop Test.

A set of cards is introduced that have the names of the colors printed on them. Each of the words is printed in a different color than what it reads. A spectator is asked to choose a number, and the magician deals down that many cards. The color on the card is shown to match a prediction the magician made before the trick even started.

The Stroop Test comes with custom printed cards that do all of the work for you. There are no complicated spelling procedures or unusual methods of displaying the cards. The number the spectator says is the number that you actually deal. Multiple clever principles interlock to create an engaging and baffling prediction effect. Start testing your audiences with The Stroop Test.