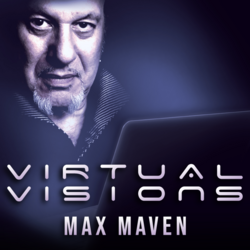 Purchase this digital product and get all six tricks for the price of five plus an exclusive bonus video. One new trick each week for six weeks.

In these strange new times, magicians and mentalists are exploring new conditions. Shows are performed from afar, using Zoom, FaceTime, Skype, and other technologies. Creating amazement within often restrictive conditions can be quite a challenge. Fortunately, you’ve got a guide who has been exploring these strange territories for many years. MAX MAVEN began pioneering interactive magic over forty years ago, and he has put that experience to work for you, by devising powerful routines that connect to audiences through a virtual reality.

These are tested, practical routines. There are no elaborate gimmicks. There’s no pre-show, or private conversation with one spectator in order to fool the others. Nothing is mailed ahead. These effects can be performed for a single person, or a large virtual audience. There are six routines, which can be performed separately, or combined into sets. In each download, you’ll see Max perform the routine with a genuine spectator (someone who knows nothing in advance). Then, Max explains the methods, with full details.

1. NORMAL MAILER
The performer displays half a dozen envelopes. The participant selects one—a fair choice. The unchosen envelopes are empty; only the chosen envelope contains a message (and yes, it’s really inside the envelope), and it’s a note specifically naming the participant!

The spectator needs to prepare nothing. Your preparation is minimal. There are no sleights or gimmicks. It’s as straightforward as that.

2. LOST & PHONED
The spectator uses his or her own deck of cards. No set-up; it doesn’t even have to be a full deck. And, the performer never has to see the cards!

Using a packet of ten random cards, the person selects one. Several cards are now discarded, so that the performer doesn’t even know how many cards are being used! Nevertheless, the spectator starts to deal down into the packet, and suddenly the performer knows that they are holding their selected card—and they are!

3. SWITCH DOCTOR
A stunning long-distance surprise, using materials that the participant has around the the house: three pieces of paper, a pen, a coin, and a key.

A game is played, with the materials out of the performer’s view. Objects are moved and switched, with enough freedom of choice that there’s no way the performer could know the position of anything. And yet, the final item is not only revealed, the performer proves that it was secretly predicted well in advance.

4. RAINBOW MATRIX
The audience requires no props. The performer displays a simple chart showing numbers, and some colored markers or crayons are used to select several numbers at random. This can be done for one person, or involve choices from up to six people. It all seems beyond control, yet the outcome is predicted.

And there’s bonus material: a formula by which you can use this system to yield any total, and a long-buried secret version using a deck of cards that’ll blow your mind.

5. MANHATTAN TRANSFER
It’s always more intriguing when it’s done with the person’s own deck of cards. It doesn’t have to be a complete pack, and you never see anything. The deck is shuffled. The participant selects his or her own card. It’s lost in the deck; even the player doesn’t know its exact location.

The person is asked a series of questions about their card, and they spell the answers, dealing cards as they do. Here’s the catch: Each time, they can lie, or tell the truth. The performer never knows. Yet somehow, they end up on exactly their own card!

6. CHECKMATES
The spectator provides the materials, simple enough that they can be found around the house. Using four index cards (or business cards, or scraps of paper), four designs are drawn. The cards are mixed, then cut or torn in half; there are now eight pieces.

A variety of fair actions are followed, with everything away from the performer’s view. The choices are legitimate; two of them involve freely tossing coins. And yet, all of the half-cards end up correctly paired. It’s a baffling series of incredible results.